We will use one public GraphQL API endpoint holding the information of all StarWars series. Open this link on any web browser, it will open one web page like below :

This is ‘GraphiQL’, an user interface tool to run GraphQL queries. You can write your query on the left side and get its output on the right side by hitting the ‘Play’ button. 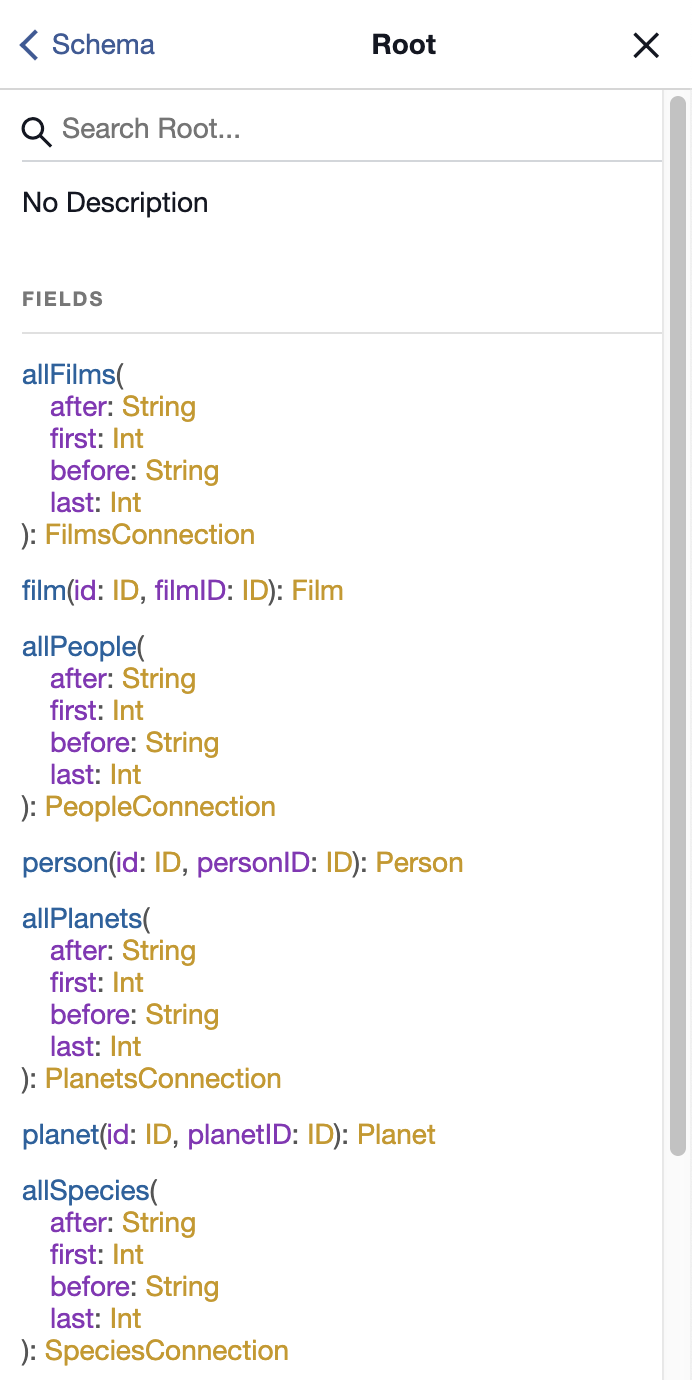 As you can see, we have different types of GraphQL schemas defined. For example, ‘allFilms’ takes four optional parameters ‘after’, ‘first’, ‘before’, and ‘last’ and it returns one ‘FilmsConnection’ object. You can click on this object name to get the list of all available fields. Isn’t it really easy?

Two more buttons are available on GraphiQL: “Prettify” and “history”. The ‘Prettify’ button is for reformatting the code and “history” is for checking the previous queries.

Let’s get the list of all peoples using the ‘allPeople’ schema:

It takes four optional parameters and returns one ‘PeopleConnection’ with the following items:

Copy paste the following query on the left side and hit the play button:

As you can see here, we got the ‘totalCount’ value and a list of ‘Person’ with ‘id’, ‘name’ and ‘gender’ for each. ‘totalCount’ is of Scalar type and ‘Person’ is an object type. Total of five scalar types are available in GraphQL: Int, Boolean, Float, String, and ID. Inside each ‘Person’ object, we are accessing only ‘id’, ‘name’ and ‘gender’ fields, but it also holds many other different fields including different objects. This is the main advantage of GraphQL, we can get what we are asking for.

We can also pass one argument with a query. For example, for the following schema:

We can pass one ‘id’ or ‘personID’ to get the required ‘Person’ object. Let’s use the id “cGVvcGxlOjE=” from the above example:

Run this query and it will return the following object:

The above queries are known as anonymous queries or queries without any name. We can also set one name for a GraphQL query like below:

This query will return the same result as the previous one.

The variable name should start with ‘$’ and the variable type should be mentioned in the query. For example, we can rewrite the above ‘GetPerson’ query as below:

Here, we are passing one ‘id’ of type ‘ID’ to the ‘GetPerson’ query. The same ‘id’ is used in the ‘person’ query call inside. 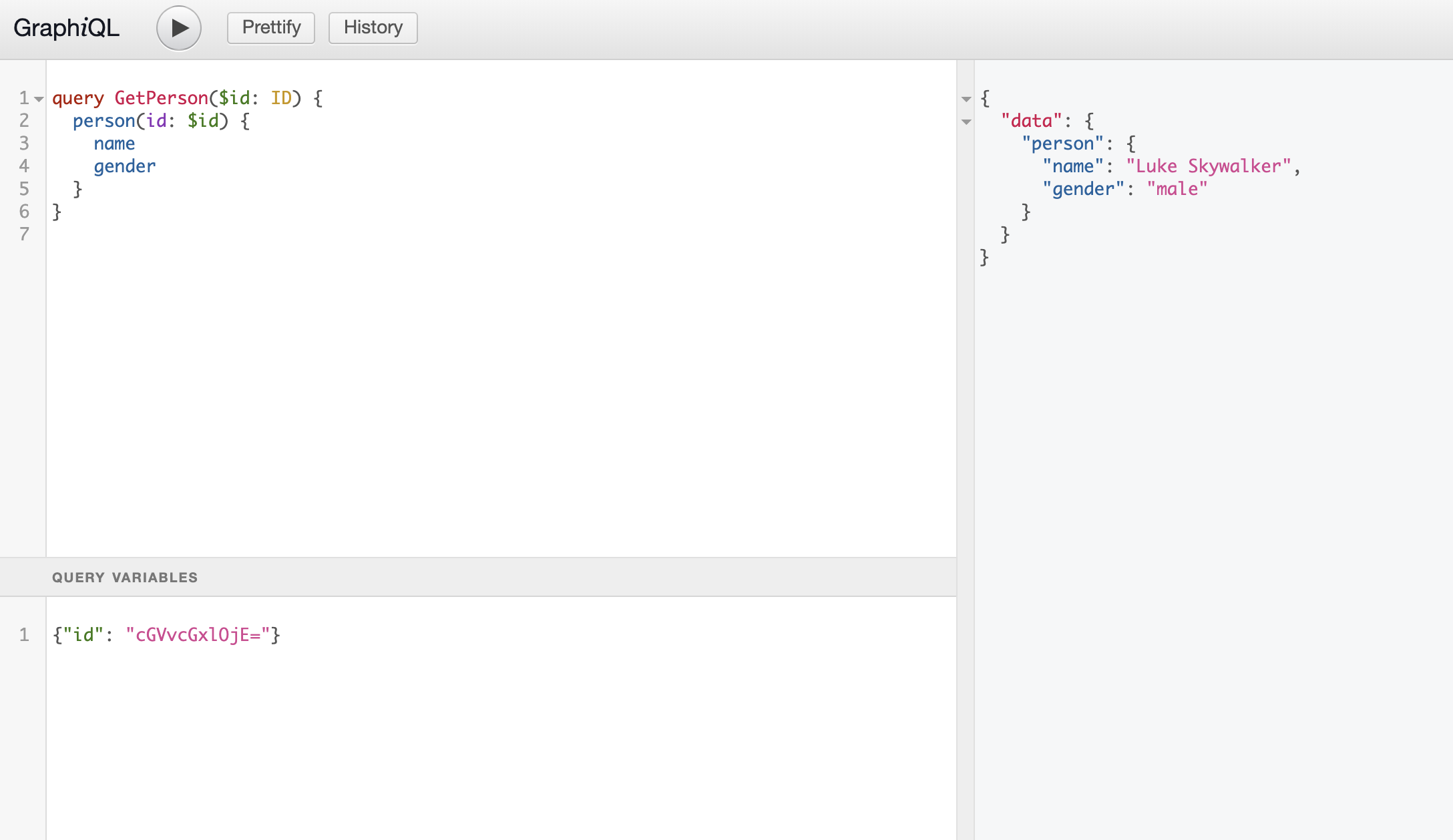 As you can see that the output is the same as like the previous query.

Skip or include data based on a variable:

GraphQL provides two directives to include or skip specific fields based on the value of a variable. For example,

We have two variables in this query. ‘id’ is of type ‘ID’ and ‘includeGender’ is of type ‘Boolean’. One more line we have changed here :

It means that the ‘gender’ field will be included in the output only if ‘includeGender’ is ‘true’. For example,

For these variables, the output will be:

As you can see here, the ‘gender’ field is not included in the output.

Similar to ‘@include’ directive, we have one more directive called ‘@skip’. It works just the opposite to ‘@include’, i.e. it will include a field only if the value of ‘@skip’ is false.

We can write the above query as below :

Here, ‘excludeGender’ should be ‘false’ to include the ‘gender’ field in the output.

We can also fetch multiple objects with different values in the same query.

This will fetch two objects for two different ‘id’s.

In this query, we are repeating the inner fields of the query on both ‘person1’ and ‘person2’ i.e. we are writing ‘name’ and ‘gender’ two times. We can extract the inner query part and use it instead. This part is called ‘fragment’ in GraphQL.

Here, we have defined one new fragment ‘userInfo’. ‘on Person’ means that the fragment is defined on ‘Person’ type. This query will fetch the same output as the previous one. Fragment is really useful if you don’t want to repeat the same code.

Aliases is used to change the field name of the return data. For the below query,

It will return the ‘name’ of the person with the provided id.

Using aliases, we can change the ‘id’ name of the return data. It is used like ‘aliases name : field name’

This query will return:

Using aliases, you can make changes to the API output on the client side without changing anything on the server.

We can use mutation to perform any of the following:

Writing a mutation is almost similar to the queries. The only difference is that we can write queries using an empty curly bracket (anonymous query) or using the ‘query’ keyword and its name. For mutation, we need to use the ‘mutation’ keyword always.

The above GraphQL API doesn’t provide any mutation operation as it is a public API. But if you have your own GraphQL server, you can define one mutation to create a new person like below :

This mutation operation is taking two arguments to create one ‘Person’. Both arguments are of string type. The GraphQL server will create one ‘Person’ with a unique ‘id’ and returns the ‘id’ with its response. Similar to the queries, you can ask for what you want in the response. In this example, the client can store the ‘id’ locally and use it on any delete or update request for the created ‘Person’ object.

Subscription is another powerful feature of GraphQL. Basically, the client can subscribe to an event of the server and whenever the event is executed, the server will notify the client.

The ‘subscription’ query is similar to ‘mutation’ :

In this tutorial, we have learned about GraphQL query, mutation and subscription. This Github repo contains a list of public GraphQL APIs. You can try with different API endpoints to get familiar with different types of queries.