In the command design pattern, all information needed to perform an action are encapsulated in an object. This information includes following things:

This declares a common interface that will be implemented by all Concrete Commands. At a minimum, it must declare one method to execute the actual action.

This class performs actual operation or command. It extends the Command interface and implements the appropriate method for execution on a receiver.

The client has the responsibility to create Concrete Command. The command then passed on to Invoker.

As the name suggests, these are only to invoke actual execute operation or action. These classes get a pre-created concrete commands object from the client.

These hold the business logic to carry out a command or operation.

The command design pattern can be explained perfectly with a restaurant example. Where the customer places an order/command with the waiter. Then waiter runs it through his manager and then its passed on to cook for execution.  When food is ready, the command to serve food to the customer is carried out by the waiter. 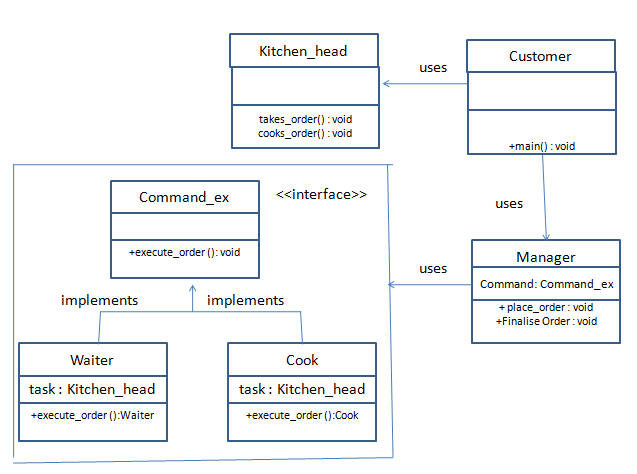 Let us see this pattern with code:

To start we will have our core the command interface:

For our example, the receiver would be actual Order object. As all the commands will be executed on that.

We have added few booleans to our receiver so we can track the commands executed.

Waiter, Manager, and Cooks will be our invokers. So we have simple class structure for them

Similarly, we have classes for Manager and Cook.

Above is a concrete command which will be taken by the waiter and executed on object Order. Similar concrete commands are prepared for validating orders, cooking and serving the order.

From above its pretty clear how the client prepares and Order and gives the command to the waiter. The class also takes you through how the other commands are carried out by Manager and Cook.

When you run this program, you will see state or Order object after each command. Here is the output:

The article gives clear idea of what Command Design Pattern is and how it can be leveraged.

You can download the code from our GitHub repository: