In this article, we are going to list down 101 Most Important and Frequently Asked Core Java Interview Questions that will give you enough exposure and confidence to ace at Job Interview.

Java is on evolution spree. The new versions of Java are being released even before you get to know the last version. With all this, the core of java remains same and with it, one needs to be proficient at it.  We will split the questions into two parts.

Q.1: Can we write multiple public classes in one Java source file?

No. The class which has public static void main() method only that class will be public not others in one java source file.

In other Programming Languages, compiler produce code for a particular system but Java compiler produce Bytecode(.class file) for a Java Virtual Machine. When we compile a Java program, then bytecode is generated. Bytecode is the source code that can be used to run on any platform machine (it should have JVM on it.)

e.g. Byte code generated in windows environment can also be executed in the Linux environment.

Q.3: What is Thread in Java and what are its advantages?

A thread is a lightweight subprocess, the smallest unit of processing. It is a separate path of execution. Threads are independent, if there occurs exception in one thread, it doesn’t affect other threads. It shares a common memory area. 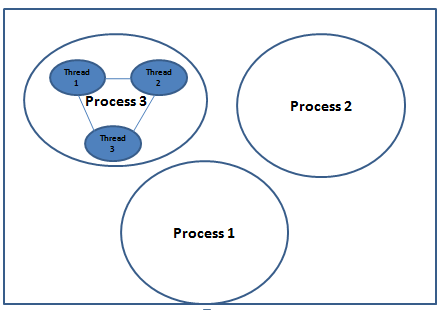 Q.4: Which are the ways to create a thread?

There are two ways to create a thread:

The first approach of implementing with the interface is preferred. This approach will allow your class to extend any other required class.

No. After starting a thread, it can never be started again. If you do so, an IllegalThreadStateException is thrown. In such case, the thread will run once but for the second time, it will throw an exception.

Q.6: What is the difference between sleep() and wait() method?

Q.7: What is interthread communication? How is it implemented?

It is implemented by following methods of Object class:
wait()
notify()
notifyAll()

Java provides the benefit of avoiding thread pooling using interthread communication.
All three method can be called only from within a synchronized context.

This method of Thread class is used to sleep a thread for the specified amount of time.

By default, every thread is given priority NORM_PRIORITY (a constant of 5).

Threads with higher priority are more important to a program and should be allocated processor time before lower-priority threads. However, thread priorities cannot guarantee the order in which threads execute and are very much platform dependent.

Q.10: Explain Lifecycle of a Thread.

The life cycle of the thread in java is controlled by JVM. The Java thread states are as follows:

Q.11: What is Multitasking, Multithreading, and Multiprocessing?

Multitasking: Ability to execute more than one task at the same time is known as multitasking.

Multithreading: It is a process of executing multiple threads simultaneously. Multithreading is also known as Thread-based Multitasking.

Q.12: What is the difference between wait and notify in java?

Q.13: What is the difference between notify and notifyAll method.

notify method wakes up only one thread waiting on the particular object and that thread starts execution. if there are multiple threads waiting for an object, this method will wake up only one thread. This choice depends on the OS implementation of thread management.

notifyAll method wakes up all the threads waiting on the object, but again the choice of threads depends on the JVM.

The final keyword is used to introduce immutability nature. The keyword can be used with Java variables, methods and classes.

Q.15: What is finally and finalize?

Finalize() is a method which is used in garbage collection. This method is a protected and non-static method present in java.lang.Object class. This method will be available for all the objects we create in java. This method is used to perform clean up operations on an object before it is removed from the memory.  One can override the finalize() method to keep particular operations they want to perform before an object is destroyed.

Q.16: What is blank final variable?

Q.18: What is static variable?

The static block is used to initialize the static data member like a constructor and will be executed when a class is first loaded into the JVM.

One class can have multiple Static blocks there execution happens in the same order they have been written in the class.

Q.22: What is garbage collection in java?

Java garbage collection is the process by which Java programs perform automatic memory management. When Java programs run on the JVM, objects are created on the heap, which is a portion of memory allocated to the program. In the end, some objects will no longer be needed. The garbage collector finds these unused objects and deletes them to free the memory area.

The gc() method is used to invoke the garbage collector to perform cleanup processing. The gc() is found in System and Runtime classes.

No. Because it uses eight primitive data types which are boolean, byte, char, int, float, double, long, short which are not objects.

For each primitive data type, there is a wrapper class dedicated to it.

Q.25: What is the meaning of public static void main(String args[]) in Java?

A Java Virtual Machine (JVM) is an abstract computing machine that enables a computer to run a Java program. It converts Java bytecode (.class file)  into machines language. JVM is a part of JRE(Java Run Environment). Java is platform independent but JVM is platform dependent. JVM is the engine that drives the Java code. 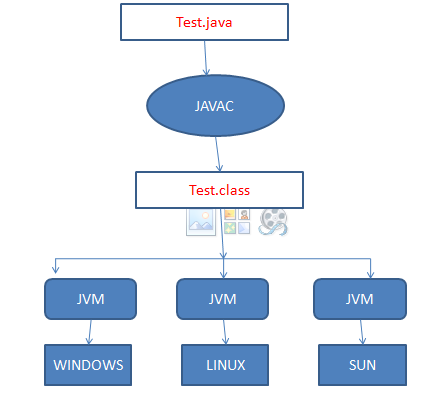 When we compile a Java program, then bytecode is generated. Bytecode is the source code that can be used to run on any platform machine but that machine should have JVM on it.

Q.27: Can a constructor be inherited in java?

No. A Constructor cannot be inherited, but a derived class can call the base class constructor.

Q.28: What is the difference between JDK and JVM?

Java Development Kit (JDK) is for development purpose which contains all the tools like javac, java, javap etc, executable files and binaries required to compile, debug and execute a Java Program and JVM is a part of it to execute the java programs.

Q.29: Name the exception thrown when an array is accessed beyond its bounds.

A package is a group of classes, interfaces and sub packages. In java packages are used to organize classes and interfaces.

There are two types of packages in Java: built-in packages and user-defined package.

Only by importing the particular package in a program, one can use all the classes and its methods. Example of built-in packages :

Q.33: What is the root class for all the classes in Java.

java.lang.Object and no need to extend it.

Q.34: The main method can be overloaded?

Yes. In one class if we have more than one methods with name “main”, and when the program will be executed the java runtime environment will check for the main method with the following syntax

No. The only inner class can be declared as static its called as a static nested class.

Q.36: What is method overriding?

Method overriding used in inheritance. When subclass declares a method that has the same signature as a method declared by one of its superclasses. So the subclass can define different behavior than its superclass.

Q.37: What is method overloading?

When more than one method in the same class have the same name but with the arguments, then it is called as method overloading.

Q.38: Is it possible to override the main method?

Q.39: How to prevent a method from being overridden?

To prevent a specific method from being overridden in a subclass, make that method as final in the superclass.

Q.40: Which are the java exceptional handling keywords?

There are 5 keywords used in java exception handling.

Q.41: Can we use multiple catch block with a single try.

Yes. But all catch blocks must be ordered from most specific to most general.

Q.42: What are the types of Exceptions in Java?

Unchecked exceptions: are checked at runtime.

All Exceptions that extend the RuntimeException class are unchecked exceptions. Class Error and its subclasses also are unchecked.

Q.43: Can we write try block without catch block?

No, It will give a compilation error.

Q.44: Can we write down a code between try and catch blocks?

NO. It is not allowed to write any code between try and catch block. Catch block should immediately come after the try block.

Q.45: What is the purpose of finally block in java?

Finally block is used in exception handling, The block is used for cleaning up of resources such as closing connections, sockets etc.

In Java finally block is always executed whether an exception is handled or not handled.

The finally block will not be executed if program exits in an abnormal way.

Q.46: Can we have multiple finally block after try.

No. For each try block, there can be more than one catch blocks, but only one finally block.

Q.47: Can we write down a code between try and finally blocks?

Q.50: Explain a situation where finally block will not be executed?

Next set of questions will be covered in our next article. Please comment if you need any more information.